Zein is a hero.

Zein is a fighter.

Zein is a warrior.

Zein is an inspiration.

Zein is a motivation.

Zein is not only all of these. Zein is much more. Zein has super powers, and his super powers allowed him to defeat cancer “TWICE” while just turning 10 years old this May. What are these super powers? His beautiful radiant spirit and courageous heart.

The story begins with a healthy child who was always active and loved playing sports, but he complained of leg pains, followed by symptoms of high fevers, night sweating, and loss of appetite, Zein’s parents took him to several pediatricians and ran blood tests for him, which revealed that something was wrong in his blood levels, making them do more tests to find out what is wrong.

But Zein’s parents never expected something that serious, the “C” word, as his father referred to it, did not cross their mind.

But cancer it was. Cancer it was while Zein was only five and a half years old. Cancer it was and it was a rare type in its fourth stage, located in his chest, abdominal area, bones, bone marrow and also hiding in the nerve cells. God only knows what it feels like for a 5-year-old to be suffering from cancer, only God knows the pain of a child going through chemotherapy and endless surgeries, and only He knows the pain of a mother and a father seeing their beloved child fighting all of this and at this age, when they know, there’s nothing they can do to help him or ease the pain.

Such a hopeless situation.

And so, they did their best to prepare Zein for the battle, and to get him ready for a journey of excruciating chemo-therapies and endless surgeries, radiation therapies and clinical trials. 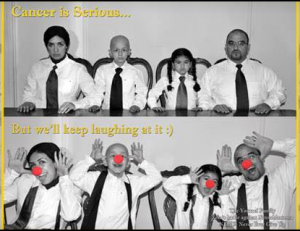 Zein’s parents decided to create a Facebook page to update their beloved ones, and everyone that holds Zein dear, about his treatment and progress. To their surprise, they found the page growing very fast and they found people showering them with incredible comments and prayers, on a daily basis, which encouraged them to keep going. Zein’s mother showed him the page from time to time to encourage him to keep fighting. Moreover, the family decided to create a Youtube channel too. According to Zein’s mother, Zein was locked in the hospital room and wasn’t allowed to get out, so she wanted to keep him busy and entertained, and that was when they decided to let him choose his favorite song and make him dance to it. Zein chose Katy Perry’s Firework, to which the family created an awesome video featuring Zein dancing with his awesome parents, his lovely sister, and the incredible doctors and nurses who took part in his treatment.

After a long and exhausting battle, Zein was able to defeat cancer at the age of 7 and was declared in remission. Unfortunately, only 2 months later it found its way back, only this time it was a fast growing tumor in his brain. But Zein and his family kept the positive spirits, and Zein fought for 2 more years and was able to beat it, again. 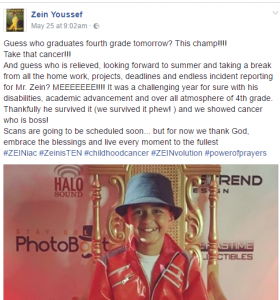 Today, Zein is 10 years old and thankfully, cancer free. However, he must consistently undergo check-ups from time to time to make sure he stays that way.. 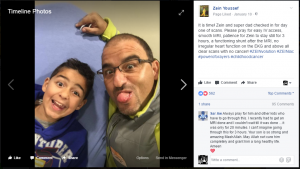 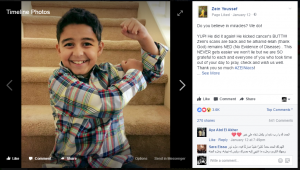 This story is an inspiration. A story we should all learn from. Zein and his family are an example of real faith and hope. They make us realize how small our problems are and how we sometimes give too much of our energy to very little, insignificant matters. They make us believe in the power of prayers and how God can do anything – if he wills – no matter how impossible it might seem to us.

Zein’s Facebook page currently has 113,588 likes. Check it, follow him and get inspired by all the positive energy he gives to the world.