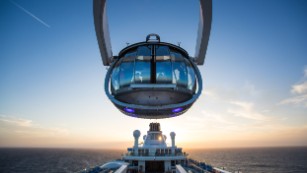 “Now if you could please step on the scale, we need to check your weight.”

A common request at your doctor’s office, sure.

But at the airport?

It’s about to become standard procedure for anyone flying with Uzbekistan Airways.

In a recent statement, the country’s flag carrier announced it will weigh passengers and their carry-on luggage prior to flights to determine how much weight they’ll be adding to the plane.

“According to the rules of International Air Transport Association, airlines are obliged to carry out the regular procedures of preflight control passengers weighing with hand baggage to observe requirements for ensuring flight safety,” says the airline’s statement.

“We are not aware of an IATA rule concerning the weighing of passengers and their hand luggage prior to flight,” says Chris Goater, manager of IATA corporate communications, via email.

“All airlines have policies in place for load calculations, weight and balance of their aircraft. These policies in turn are subject to the rules and regulations of their national aviation regulator.”

Uzbekistan Airlines says passengers will be weighed on scales in airport departure zones.

“The weighing record will only contain the corresponding passenger category (i.e. male/female/children). As for the rest, the full confidentiality of results is guaranteed.”

Aviation bodies like the U.S. Federal Aviation Administration (FAA) and the European Aviation Safety Agency have issued formulas for airlines to calculate the average weight passengers are adding to a plane.

Most commonly, that involves applying an average passenger-mass value. For instance, the latest FAA guidelines on aircraft weight and balance control set individual passenger weight averages at 190-195 pounds for adults and 82 pounds for kids, depending on whether it’s summer or winter. (Based on the assumption people wear heavier clothing in winter.)

These figures also include a 16-pound allowance for personal items and carry-on bags.

Uzbekistan Airways hasn’t responded to CNN’s request for clarification on the new guidelines and whether overweight passengers will be penalized.

Should it make the controversial move to charge fliers extra, it wouldn’t be the first time.

In 2012, Samoa Air made global headlines by introducing a pay-as-you-weigh fare structure.

“The next step is for the industry to make those sort of changes and recognize that, ‘Hey, we are not all 72 kilograms [about 160 pounds] anymore and we don’t all fit into a standard seat,'” Chris Langton, Samoa Air chief executive.

“What makes airplanes work is weight. We are not selling seats, we are selling weight.”